How we built our (SaaS) pricing by calling our users

Pricing a product for a SaaS business is tricky. Very often, you have no variable costs and what you really do is “guessing a price” based on the time / money your users save or the incremental revenue / margin they can generate with your solution.

The good thing is: you can change easily your pricing over time, add or remove plans, features, and price levels.

However, that doesn’t mean you shouldn’t try to be right when you open your product to the public.

The usual way of getting around pricing in SaaS

From what I could exchange with other SaaS founders, the process often goes along those lines:

Alice            “But let’s start conservative. We’ll be adding features later and we can add plans with a higher price”

Eric              “I’m not sure we should price per user if we want customers to invite all their team. But if we price with thresholds, the guy in the 10 users plan will feel bad if he has only 6 users”

Ready to build better conversations?
Simple to set up. Easy to use. Powerful integrations.
Try for free

And it can go on and on.

The point is, each co-founder has his own experience and references. If you’re a copycat or if you have a clear competitive landscape you can start from here. But if you’re building something “new”, you’ll find it very hard to resolve opinion-based arguments.

We had these discussions – plus others given the fact that we do have variable costs and more complexity being in the telecom space (you can have numbers, inbound calls, forwarding, outbound calls… and that differs a lot per country)

We sent emails to hundreds of users asking them a feedback about our pricing. We wrote down our target pricing and requested a OK / NOT OK feedback (we felt that asking an open question like “What would be ready to pay?” would not generate honest answers)

We had the feeling most users tend – naturally – to kick-back on your proposed pricing asking for a lower price that what they would actually accept:

But we called as well over 50 users. First because we provide them their business phone system and we wanted to reach them via our own product. Second, because we wanted more qualitative feedback. Indeed, the input we got wasn’t statistically relevant but it was of great interest to understand the blocking points in the purchasing behavior, and how people relate our offer to their existing solution.

All-in-all it cost us 5 hours (including missed calls and voicemails). Most calls didn’t last more than 5 minutes as we’re talking to busy people. But the amount of information you get in these 5 minutes probably corresponds to a 2-page email. And it’s interactive of course, so you can challenge and go deeper as you talk to more and more customers.

The risk here is what Des Traynor outlined in his last (awesome) speech at #B2BRocks in Paris: anyone can take 4 users and build a general rule from it… until you find out you had 400 users you haven’t asked who think differently. 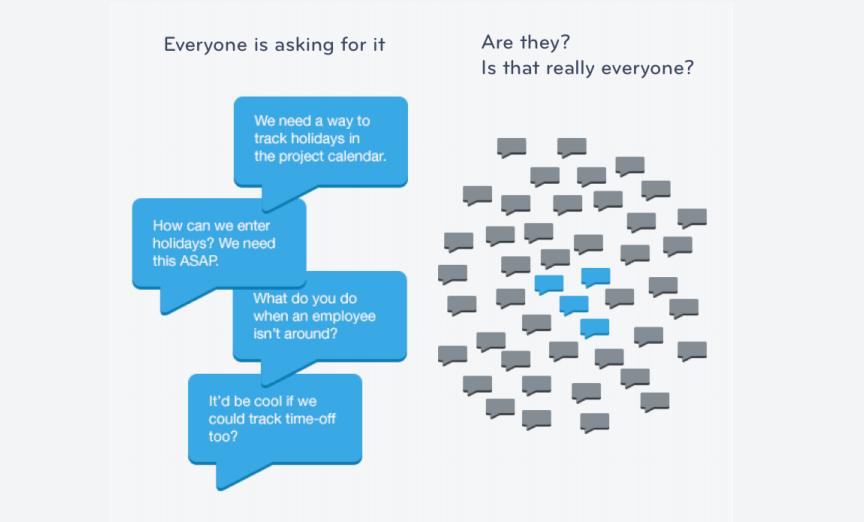 That’s where messaging to your users + deep-diving over the phone with some of them is so complementary.

So what’s the awesome result of this exercise?

Well, let’s be honest: our pricing is quite « classical » and I can’t pretend that we found the holy grail of SaaS pricing.

But pricing as such is not so important as knowing the underlying drivers of your pricing, which hypotheses you’re testing and the variants you can try later.

We have gained a much clearer understanding of the way people value our product, whether on incoming calls, outgoing calls, collaborative features, mobile vs office usage, etc.

For instance, our product (Aircall) generates increasing value as you increase the number of users (because it’s collaborative and because it remains super easy to use even with 50 users) but at the same time decreasing value because the more you add people in a team phone line, the less calls each of them gets (marginally).

Another example: we want to make the management of your calls as easy as possible – so we started off with the idea that our plans should include unlimited call forwarding to any device, so you don’t have to worry about a number of minutes per month, whether to mobile phones or to landlines.

We still love that idea, but we realized that many users just want a number to look local or to be contacted only a few times per month. Unlimited call forwarding is a vast overkill for them.

In the end, we have defined a pricing roadmap and we’ll be able to build it over time to meet the key user patterns – with the minimal complexity.

If there’s only one thing we’ve learned and we’d like to share with SaaS startups : if you have the opportunity to gather phone numbers from your beta users (or Skype IDs or if you can invite them for a quick chat during the beta), don’t waste the opportunity of a few one-to-one calls with structured questions before you go public.

And if you need a phone line to make & receive these customer calls, try Aircall for free!

Share:
Ready to build better conversations?
Simple to set up. Easy to use. Powerful integrations.
Try for free